A dramatic finish for the Red Hook Youth Baseball season

The Red Hook Youth Baseball League concluded it’s 15th season last Saturday with the underdog, BYA Royals, sweeping the previously undefeated Southern Trucking squad in a best of three championship series, two games to none. AmeriCorps members helped to found the League 15 years ago and continue to support every aspect of the League through their service today through coaching, recruiting, maintaining the ballfields or planning championship day festivities.

After the Royals took the first game on Monday night, the teams faced off Saturday morning to conclude the series. The hard fought game was knotted at 3 at the end of regulation, forcing the game into extra innings as the sun moved high in the sky and temperatures inched passed 100. Southern Trucking made quick business of reclaiming their lead, posting 3 runs on the scoreboard. Things were looking bleak for the BYA, down 3-6 at the bottom of the inning with two outs and no one on base. Two consecutive hits set the table for Brian Velasquez to hit a two RBI triple and pull within one. The next batter, Paul Deceglie got a base hit, driving Brian home to tie the game. Paul subsequently stole second on a wild pitch. The Royals dugout was already on their feet when the next batter, catcher Leo Mota knocked a game winning walk-off single up the middle to clinch the championship in a thrilling 7-6 come-from-behind victory. The BYA win was unquestionably aided by their pitcher, Tommy Camarda, who hurled 6 strong innings and notched 13 strikeouts.
On the other diamond, the battle for third place between Hynes’ Heroes and the Defenders also had a dramatic conclusion with a photo finish play at the plate to end the game. Tied at 3, with two outs and a runner on first, Hynes’ coach Paul Vitale took a risk, banking on a Defender error, and called for 3b Raheem Bernard to steal second. The throw from the catcher sailed over the second baseman’s outstretched hand into center field and the runner rounded second, took third and sped for home on the overthrow. A well-executed relay nailed the runner with C Alex Ruiz applying the game-saving tag.  Both teams’ coaches agreed to call the game a draw due to the heat and to allow the players go watch the thrilling end of the championship game.
After the Royals doused their coaches with buckets of ice water and claimed their championship trophies, the young ballplayers were reminded that the game is about more than winning and losing, and what really matters is showing up, playing hard, and being a good teammate. This year, the League instituted the “Ray and James Brodick Award,” named in honor of the League founder and his father, which honors these qualities by recognizing one player from each team who most exemplifies the “'Love for Baseball' through sportsmanship, hard work and dedication throughout the season." This year the award was given to four inspirational young leaders: Leo Mota of the BYA Royals, Xavier Rivera of the Defenders, Harold Bandouveris of Hynes’ Heroes, and Michael Bosch of Southern Trucking. The award will be permanently displayed in the Red Hook Community Justice Center and serve as a reminder to the young ballplayers that lessons learned on the ballfields can be valuable in the off-season and serve them in life. 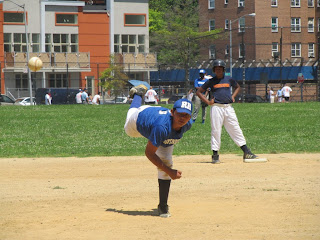 Defender, Luis, in perfect form, pitched all 6 innings of the first round playoff game and came within 3 outs of knocking out #1 seed Southern Trucking. 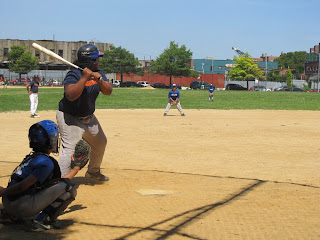 Southern Trucker, Tatiana, got her share of RBI's (including an in the park grand slam!) to help clinch her team's undefeated (9-0) regular season. 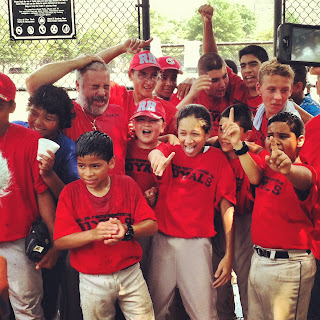 After a 3 hour game in 100+ heat, the BYA Royals celebrate their "come from behind walk-off victory" over Southern Trucking scoring 5 runs with 2 outs in the last inning.
Posted by New York Juvenile Justice Corps at 12:57 PM